On Line: Drawing Through the Twentieth Century, MoMA, New York (2010)

—Heizer is interested in the transformation of the earth’s surface through human action. This work relates to Circular Surface Planar Displacement Drawing (1970), an artwork in which the artist drove a motorcycle in circles in Jean Dry Lake, Nevada, creating a pattern of lines. The photographs document the process; the photographer and camera were strapped to a twenty-four-foot scaffold that was moved sixteen feet for each for each new shot. Heizer was a key member of the Land art movement, whose adherents made monumental land-based sculptures.
e-catalogue (Galerie 10, MoMA) 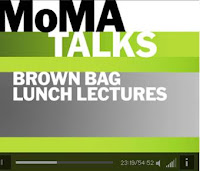 This lecture will trace the key themes of the exhibition—from the emergence of the line from the picture plane early in the century to the political and digital implications of the line in present time—through the work of selected artists, making an argument for a reconsideration of the idea of drawing, and its fundamental position at the heart of twentieth century art.