Medford, MA - The Tufts University Art Gallery is proud to present Nancy Holt: Sightlines, an in-depth examination of Holt’s early projects from 1966 to 1980, on view from January 19 through April 1. Holt’s pioneering work falls at the intersection of art, architecture, and time-based media. The career of this important American artist took off in the late 1960s when she and other like-minded artists in the U.S. turned away from the emerging commercial gallery system to embrace the American landscape and its geological diversity. Located beyond the confines of New York gallery walls, Holt began working on large-scale outdoor projects that responded to the environment and offered novel means for observing natural phenomena.

Although Holt’s work has regularly appeared in surveys and anthologies on the Land Art movement, many of her forays into film and video, landscape architecture, and environmental ecology have gone surprisingly unexamined. This exhibition includes some 40 works and archival documents and was organized by the Miriam and Ira D. Wallach Art Gallery of Columbia University and curated by Alena J. Williams; the Tufts presentation has been organized by Director of Galleries and Collections Amy Schlegel.

Nancy Holt was born in Worcester, Massachusetts, in 1938 and grew up in New Jersey. Shortly after graduating from Tufts University in 1960 as a biology major, she moved to New York, where — alongside a group of colleagues and collaborators including Michael Heizer, Carl Andre, Eva Hesse, Richard Serra and Robert Smithson — she began working in film, video, installation, and sound art. With her novel use of cylindrical forms, light, and techniques of reflection, Holt developed a unique aesthetics of perception, which enabled visitors to her sites to engage with the landscape in new and challenging ways.

Works like Sun Tunnels (1973–76), Views Through a Sand Dune (1972), and her extensive Locator series provided a new lens for observing natural phenomena (such as summer and winter solstices and sun and moonlight patterns), which transform specific geographic locations into vivid and resonant experiences. Her sculptural sites allow the viewer to channel the vastness of nature into human scale while creating a contemplative, subjective experience grounded in a specific location in real time.

Holt wrote in 1977 about her magnum opus, Sun Tunnels, located in the Great Basin Desert of Utah: “I wanted to bring the vast space of the desert back to human scale. I had no desire to make a megalithic monument. The panoramic view of the landscape is too overwhelming to take in without visual reference points... through the tunnels, parts of the landscape are framed and come into focus... the works encloses—surrounds...”
While Holt may be best known for Sun Tunnels, the construction of which is prominently featured as a large video projection, the exhibition includes a good deal of material being shown for the first time. Included are early color photographic works taken during trips to different Mid-Atlantic States, to the western states of Utah, Nevada, Montana, and California, and abroad to Wales, England, and the Yucatan peninsula of Mexico. New digital photographic works document in color the passage of time at some of her sites such as Sun Tunnels. A number of archival documents including text-based works (such as scripts and concrete poetry), audiotapes, and drawings appear for the first time.


EXHIBITION CATALOG
The exhibition coincides with the release of Nancy Holt: Sightlines by the University of California Press, the first published retrospective account of Holt’s 45-year career. The book is edited by the exhibition curator, Alena J. Williams. The multi-authored book charts Holt’s artistic trajectory from initial experiments with new and unconventional media like sound, light, and industrial materials to the culmination of her development of major site interventions and freestanding environmental sculpture. The book is available for purchase through the Tufts University Art Gallery for $40 (or $25 for Tufts students and faculty). 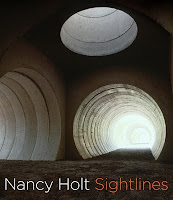